That seemed serious and Vann had stated it with authority.

He winked at me, then punched his right arm forward and said “Ze-bam!”  He had done this a few times previously and I had eventually worked out that it was his statement of excitement and accomplishment.  Then he continued.

“Like I was saying, Tom Sexton owned a bunch of the land up in Two Harbors, including down by the lake.  There was an iron company in the area at the time, Northwoods Iron, and they wanted all of that land Tom had, both for mining and for allowing their railroad to run in and out of the bay area.  It was real important to them if you know what I mean?”

“I’m guessing that means they didn’t take no for an answer?”

“That’s what I’m saying.  Tom sold them those first few plats, just figuring I guess that it was some extra money.  Plus, there weren’t a whole lot of people up there at the very beginning.  He just didn’t see the harm in it.”  Vann paused for a moment.  “You want any more of this?”  He stretched his hand up toward me, fingers wrapped around that emerald green bottle.  I waved it off but had a question.

“I’m liking this story, but how do you know so much about Tom Sexton anyway?”

“I read things, read them while I was there, asked around, did research man, real research.  And…well forget that.  So, he sold them some land and it was no big deal.  But they kept coming back around his shack wanting to buy more.  Always the same two guys, big as lumberjacks but dressed nicer, politely dressed I guess is what they used to call it. They would just be there when Tom walked back in from the woods or from fishing.  For awhile it was all nice conversation ya know, good day Mr. Sexton, what’s the trapping like this year Mr. Sexton.  It didn’t last long that way, not once Tom kept saying that he would just as soon keep his land.  He had two dogs, brothers, black and tan setters which were pretty rare in the states at the time.  He woke up one morning to the howl of one of them, sounding like it was hurt bad.  He found it about ninety feet outside his door caught up in a bear trap.  There wasn’t much to do except put it down.”  Vann looked up at me.

“That’s what I’m saying, the trap wasn’t his, he didn’t have any worries about bears himself and he sure wouldn’t have put one where his dogs could come across it so near to his shack.”

“And that’s what made him sell his land to the pretty lumberjacks?”

“No, no, hardly that, not yet anyway.  It’s just how it started.  They did things to him, took away things, spread rumors, all that stuff.  They wanted to intimidate him because they wanted that land.” 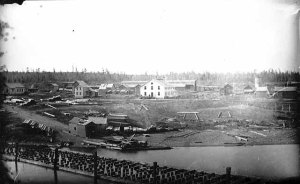 “Yeah, I get that. So how long did it take for them to get him to sell all of his land?”

I had to laugh at that and I did.  “Well, they weren’t very good at it I guess.”

“That’s not it.  They didn’t really start to put the pressure on until the last three years or so.  That was when the work on the railroad was really heating up.  Tom took some pretty thorough beatings before he gave in but in the end he did.  By 1883 they had all of his land expect four lousy acres that he ended up renting out to merchants who wanted to sell things to the workers putting in the railroad.  It turned into a real bad place, Whiskey Town it was called.”

“And then they somehow took that from him too?”