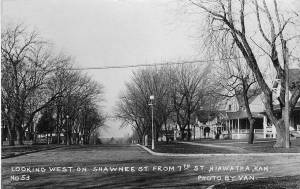 looking west on shawnee from seventh courtesy of hiawathapics.com

Six weeks later Olivia knew and stepped out of the kitchen door on a Saturday morning, again with a cup of dark coffee, and told her mother.  She had thought this was going to be the worst of it and was shocked by her mother’s calm response.

“Funny how some things work out daughter.  A moment in time is all it takes.”

Olivia had no reply for that and just sipped quietly at her coffee.  Her mother looked over after several minutes and saw that she was also crying, tears that she refused to wipe away running down her cheeks.  Standing up, her mother walked over and offered Olivia her hand.

“Come with me.  I want to show you something.”

Her mother led her into the house and then into her bedroom where she pointed to a long, flat chest under the bed.  Olivia let go of the hand to kneel down and then pull the chest out, having to tug hard at it several times to get it to move.  It was well made of oak with brass fittings and the top of it was carved with her mother’s name.  Olivia had seen this chest before however had never been allowed to open it.  Following a wave of her mother’s hand she finally did so, catching the sharp smell of moth balls mixed with old wood as the heavy top was lifted up.  The things inside were as you might imagine them; stuffy and old, faded and musty, care-worn and well-tended.  Each item struck a chord of curiosity in Olivia, and she felt a strong urge to ask questions.  Why is this black dress with the lace collar in here?   Who is the soldier in this picture?  Why are you keeping a broken bell?  She wanted to ask, however a quick look at her mother made it clear that this was not going to be a journey of universal discovery.  Most of what was in the chest would remain in the old woman’s mind and heart.

“Take out that red box and underneath you will find a cloth sack with a purple string.  That is what I want to show you.”  Her mother had taken a seat on the rocking chair which sat next to her bed.

Olivia did as her mother asked, handing up the cloth bag and then sitting on the floor at her mother’s feet, a memory of childhood story time fleeting past her eyes.

“I kept this not just because you wore it as a baby, but because it was made by your great-great grandmother.  She had originally made it for my mother right after she was married to your Grandpa Silas, however it ended up not being used.  So, when I was about to give birth to you, she gave it to me.  Once you grew a little bit and this fit you, well you wore it often my dear.”  Saying this, her mother struggled briefly with the string that closed the top before opening the bag and pulling out a white dress.   It was of a style not used anymore, having too many gathers and a drape that was no longer the fashion.  It was elegant and durable although its faded color and occasional faint spot told of both its age and its hard use.  Olivia reached up and touched the dress, feeling its worn, smooth fabric ripple across her fingertips.

“Why was it never used?”

Her mother did not immediately answer and Olivia continued to play with the edges of the dress.  There were some tattered seams and a small tear in the front hem, a re-stitch of one sleeve and missing button on the back.  Olivia tried to place her younger self in this dress, however she had no pictures of herself back then and found it difficult to imagine.  Realizing that her mother had not answered she looked up to see a pained, far-away look in the woman’s eyes.  The touch of Olivia’s hand to her arm brought her eyes back down and she reached out to run her hand along Olivia’s check.

“That child did not make it out of it’s birth bed my dear.  It only lived one day and after that, despite all the other children she had, my mother just could never look at that dress again.  That girl, my older sister, should have been her eldest and the start of her family with your Grandpa.  It took them five years after that before they had me.  I have to tell you daughter, that day she gave me the dress, well it was quite a moment let me tell you.  The topic of this dress had been a forbidden subject for years, something my father wouldn’t even discuss when a family member would bring it up.  Forbidden all those years and then one day my mother just walked into our living room  and handed it to me.  Your Aunt Martha was there and almost gagged on an apple she was eating.  I guess my mother had finally gotten over it, or having me starting my family with your father had made it possible to pass it along with well-wishes.  I dare to say that she still worried a bit during the first few days you were alive, but when you proved to be so very healthy she relaxed and seemed happier than she had in years.”  Her mother paused and rubbed her hand over the front of the dress.  “It’s a mixed memory I guess, sadness and happiness.  Its, well, bittersweet I guess.”

“Mom, I’m sorry, really I shouldn’t have asked.  I know that you don’t talk much about your past and I should have left it alone.”

“It really is okay Olivia.  I brought it up I guess by showing you that dress.  Cracked open the story book so to speak,” and she offered her daughter a wan smile that did little to reassure Olivia.

“Let’s just drop it Mom.  Thank you for showing me this dress.  Is it something I could have to give to my baby?”

“No dear, I don’t think so.”  It sounded final however Olivia looked up and realized her mother had recovered and was truly smiling now.  “I think I would like to make you a new one for that child.”