“Well, are you ready to try this or not?”

Her daughter glared back at her, although the look was shrouded in several layers of desperation.   They held each other’s gaze for long moments and then Olivia motioned for the cup.  Taking a small sip she held it in her mouth briefly before swallowing.

“Buttermilk. I thought it would suit you given your recent,”

“Just sip it, I’m sure it will make you feel better.” 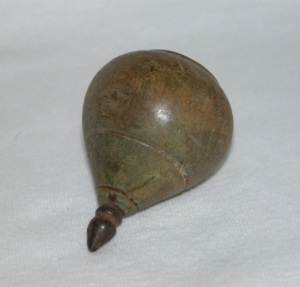 Olivia was back to moaning, more softly but just as consistently, although she was taking small sips from the cup.  After going out to give Claudia a spinning top to play with, the old woman returned to her daughter’s room and sat on the bed, holding her hand and occasionally reminding her to keep drinking.  When she was finally done, the moaning had stopped and after a few additional minutes Olivia drifted off to sleep.  Carrying much hope, her mother left and returned to the sitting room to check on Claudia.

Nothing at all happened for several days as Olivia stayed in bed, feverish several times although not severe enough to warrant any medicinal intervention from her mother.  Doctor Martin had cautioned in his letter that while the therapy may take several days to be effective, once it was, the results were likely to be dramatic.  Part of this prediction came true, although not exactly as Olivia’s mother had hoped.  Three days after receiving the sepia treatment, her daughter strode forcefully out into the kitchen and slapped Claudia hard across the face.

Screaming in pain, the young girl hurled herself into the apron of her grandmother, who had already dropped a bowl of green beans in shock.

“What are you doing?”

“I’m done with this nonsense mother!  That girl is going to cry, and she’s going to cry every damn day until I’m convinced she won’t turn out to be the town idiot!”

Claudia was clutching frantically at her ears, altering from the left side to the right with her one hand.  Olivia’s mother reached down and covered them for her and she felt her granddaughter twisting up the apron in her fist as she fought to get as close as possible for protection.

“You will stop talking right now!  Get out of here and leave her alone!”

“You can keep her safe for right now mother, but I will get her, tomorrow and the next day and the one after that!  I will make her act normally!”

“There is nothing wrong with her Olivia!  You’re the one with the defect, it’s just one that you are afraid to admit!”

Once her daughter had stormed back into her bedroom, the old woman collapsed on the kitchen floor, exhausted from the confrontation and the accumulation of weariness that had built up inside of her during the time of these recent struggles.  Claudia, tears still falling and with a large welt on her left cheek, kneeled anxiously over her grandmother, tapping at her shoulder in an attempt to rouse her up.  This simple act finally cut through, and Olivia’s mother pushed herself up onto her knees and then wrapped both arms around the little girl.  As she did so, she quickly and efficiently processed the facts; the sepia cure had not worked properly, perhaps because of her substitution, her own daughter was a danger at least to Claudia and possibly to others, and her granddaughter must be removed to safety very quickly.  It was with that final admission to herself, that she could not protect Claudia any longer, that she reluctantly realized she was going to need to contact her remaining brother.

It had been quite some time since she had seen him, and although time may have taken the sharp points off the contentious relationship they had always had, she still dreaded asking him to assist her.  The occasional letters they had exchanged over the decades since parting for the last time had been perfunctory at best, a stilted attempt at maintaining contact.  That day of their last good-bye, standing outside a stagecoach on a chilly spring morning of a kind so common in Maine, had not been intended to be the final time they saw each other.  Wyatt had been headed west, out to seek more adventure and opportunity, leaving with reassurances that he would be back in a few years.  She had accompanied him as a manner of courtesy and obedience, directed by her father to say fare-thee-wells for the family as he could not do so himself.  Growing up, they had not gotten along well as brother and sister, she thinking that he was difficult and prone to trouble in a way that she later learned to describe as pernicious.  Who knows what he specifically thought of her, other than his usual comments on her matronly manner and prissy habits.  She felt that she only acted that way toward him, however, had later come to accept that she did posses some of those attributes although they hardly exhibited themselves as starkly as Wyatt seemed to believe.  In her head she could still hear his often repeated taunt from childhood, “Don’t bring your fun to Harriet, she’ll just want to bury it.”  She also thought it a distinct possibility that he would be happy to take up saying it again if given the chance.