The train ride to Boston passed in much the same manner as the six weeks at the house had, with Ambrose taking whatever opportunity he could to torment Claudia.  The boy, cruel but clever enough, had realized that he did not need to touch Claudia to get her to tears.  Instead, he would just maneuver himself into her line of sight whenever he could, and then mock her, usually by pulling his arm out of his sleeve and then trying to pick things up with the empty cuff or poking himself where his arm used to be.  Although Wyatt saw great strength in the girl when dealing with adult condescendence and mistreatment, the actions of children around her own age had a very great effect on her, although she always refused to speak with him about it.   In the final weeks at the house, Wyatt had foreseen that the coming trip was going to present such opportunities for abuse and torment toward Claudia and had managed to change his ticket to a separate compartment for himself and the girl.  Such arrangements did minimize the chances that Ambrose had to torment her; however, the boy took full advantage of what he did get and by the time the train pulled into Boston, Claudia had not not spoken in five hours.  Her face had remained pressed up against the window for that entire time, her fist curled in a ball as she wet herself, refusing to walk out and down the corridor to the restroom, where she knew the boy would be waiting.

As the whistle of the locomotive shrilled to announce the train’s arrival, Wyatt stepped out of the compartment after handing Claudia another dress to change into.  Standing outside the door, he glared at Ambrose, who stood near his parent’s compartment playing with a tin whistle.  The smirk on the boy’s face had Wyatt clenching up his own fists, trying to resist the impulse to walk over and box the youngster’s ears.  Isaac and Lydia emerged moments later and walked past him without a word.  Wyatt collected Claudia up several minutes later, hoping that his son’s family had gone far enough ahead to be lost in the crowd, a wish that fortunately came true.  That left Wyatt and the girl once again standing together outside a busy station looking for a hansom. 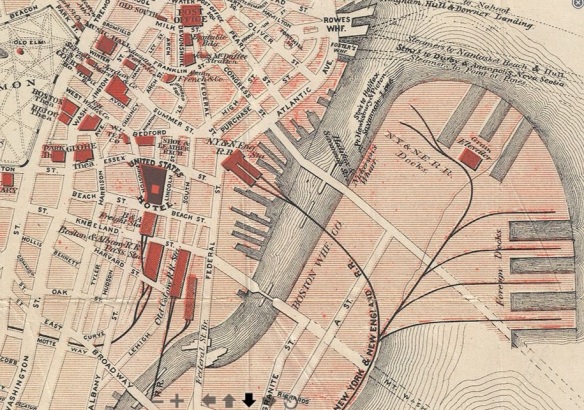 Having come in on the New York & New England Railroad, the final transfer of their long journey to the coast, they emerged directly into the heart of the wharf district in Boston.  The sharp smell of the salty air was mixed with the pungent odors from the wet docks and the decaying fish that pooled along the edges.  The noise was startling and overwhelming, both to Wyatt and the young girl, and they both simply stood on the edge of Atlantic Avenue for fifteen minutes, wide-eyed and slightly slack-jawed.  The water traffic along the wharf was varied, with fishing boats, tugs and small sailboats competing with cargo ships that seemed to move in slow-motion compared to the other boats.  Slightly farther off in the distance were several large passenger ships, moored at the foreign docks and awaiting the crowds that would soon temporarily move in for their voyage across the ocean.  Behind them, toward the land side, all kinds of large buildings rose up, with the Old Colony Depot, the Post Office and the United States Hotel being most prominent.  Denver might have seemed like a large town to Wyatt, but he had to admit that this was beyond anything else he had seen in his life.  Claudia, initially just as shocked as her great-uncle, recovered more quickly and was well into asking questions before Wyatt shook himself and began to pay attention to her.  As they walked toward the U.S. Hotel, which Wyatt had arranged on his own after finding out about Isaac’s plans for their one and a half days in Boston, he had to admit that he was enjoying the experience despite its strangeness.  Having been on the move for much of his life, he thought that maybe he had been content for too long with his settled-down home in Denver, and that this trip was going to revive some of his spirit.  As they walked into the hotel Claudia had looked up at him with a one word question.

Patting her hand, he happily replied, “Not here dear, he is most definitely not staying here.”

The next day, their only full one in Boston, Wyatt was determined to go out and walk the town with Claudia, and they had set off directly after breakfast.  Although he was pleased to be away from Isaac’s family, at least until they were aboard the ship, some malicious part of him wanted to see where his son had managed to put his own family up for their stay.  Knowing the address, but of course not the town, it took them two hours  of walking to find it, a dilapidated and leaning building on the corner of Commercial and Fleet Streets.  At first glance Wyatt could not determine which part of the structure was most likely to fall in first, although it all seemed to be leaning away from the water.  Shaking his head, the two of them kept on walking and were able to see many of the nearby sights, including Faneuil Hall and the famous Common and Public Garden.  When they returned to the U.S. Hotel that night, both of them worn out and hungry, they took advantage of the restaurant and ate well, with Claudia finishing up with two bowls of chocolate ice cream.  Before they retired for the night, Wyatt asked the girl to sit down on his bed.

“You know that tomorrow we are going to be sailing away, across the ocean, on a ship.  I won’t bother to promise you that this trip isn’t going to be rough.  Although we have our own compartment on the ship also, it is small and we certainly cannot stay in it for all of the six days we will be aboard.  Besides, I want you to see the ship and have what fun you can.  I am certain that Ambrose will be up to his usual games.  You do understand me Claudia?”

The girl just nodded her head.

“So, let’s just promise each other this.  We stick together okay? And I will keep that boy off of you as much as I can.”

In response, Claudia just took his hand and squeezed it.  At about that same moment, her mother, one arm wrapped around the portrait of her daughter, shuddered and let out one last breath.