Issac’s cheerful announcement had lightened up the mood during the course of dinner that evening and for the first time in quite awhile Wyatt felt no palpable tension as he ate.  When he awoke the next morning his son was already gone and Wyatt enjoyed his pipe in silence until Claudia peeked her head out the door.  She was silent but he knew that she must be hungry, so he prepared them a small meal and then announced that they were going back into town.

“Horses?” Claudia asked, a small smile on  her face.  She had been quite taken with the ones that had pulled their wagon from Hamburg and her fascination seemed to have survived their departure.

“No, not today.  We are going to have to walk.  It will be a bit of a long journey but I will carry you if you get tired.  It will be a little adventure for us, we can explore the land around here.”

Claudia seemed content with that explanation and they set off thirty minutes later, Wyatt having packed some fruit and a loaf of bread into a bag along with a flask of water.  The walk was indeed long but they found diversions along the way, Claudia chasing after animals such as hares, marmots and even one badger that was inexplicably out wandering the edge of the forest during the daytime.  Wyatt called her back off of that chase, fearful that the animal would decide to stop running and instead attack the small girl.  For his part, Wyatt spent his time trying to identify all of the various trees they walked past and had to admit to himself that there were a good number that he knew nothing about.  The oaks were impressive though, strong and broad, all of them seeing to be extremely old and gnarled, broken limbs strewn about the ground beneath them.  He did have to carry Claudia several times, but she was still small enough that this caused him little inconvenience.  By the time they reached town both of them were hungry again.  After eating their lunch leaning against the fenceposts of a small farm, Wyatt managed to get a message sent back to his sister from the telegraph office.  That conversation had been difficult, mostly pointing and small German words, although the operator did seem to know how to send a telegram in English.  At least Wyatt hoped that was the language it arrived in, as Harriet would likely not be amused by one sent in German.  He did not recall her as having much of a sense of humor. 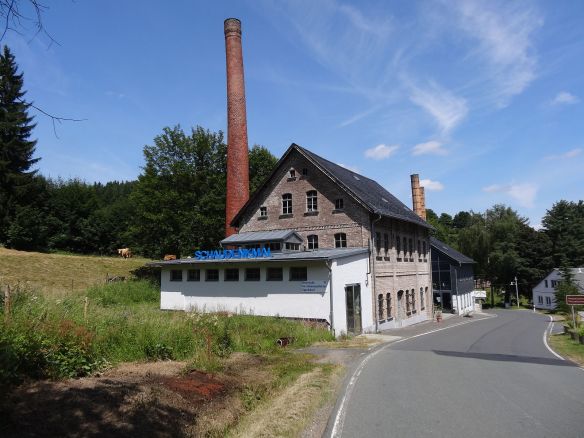 Exhausted by the time they had returned to the estate, Wyatt listened without comment as Isaac regaled everyone with the details of his day at the porcelain factory.  The company apparently was fairly new, having only begun to produce products in 1877, and had recently taken on a new partner in Mr. Laube.  Isaac was quite taken by Bernhard Wagner, who he described as the genius behind the operation and a tall and imposing gentleman.  Whatever he had done, it was working, as Issac also noted the large number of items being produced and the notoriety the small company had achieved in just its few short years of operation.  The mention of porcelain products managed to get Lydia’s attention, who had been absent-mindedly nodding up to that point.

“Just what do they make Isaac?  Have you seen their porcelain?”

“Of course my dear, of course.  As I said, I was right there as they were arranging them for the kiln.  And what an oven that is! I cannot imagine the temperatures they achieve in that factory, although I am sure I will find out soon.  Their smokestack is tall, very tall, it rises up over the factory itself, you should see it sometime.  Quite impressive.”

“But the products husband, what do they make?”

“Well, I shall be expecting a new set of mugs then, we can certainly use them around here, especially as some of our crockery was broken.”

“Yes, I know, you already told me what you found in those chests.”

“Just get it replaced for me Isaac.  I am sure that your new employer can accommodate some small items for their employees.”

That had ended the meal, and although there was tension again, it had not been directed at Wyatt or Claudia, and they got up and left quietly for their cabin.  After singing her to sleep, Wyatt climbed into his own bed, admitting as he did so that every muscle in his body was quite sore.  The next morning he felt no better and Claudia was gone.

It had not been apparent at first, as the usual routine, established in just a few short days, was for Wyatt to smoke his pipe and await Claudia’s head peeking out the door.  The morning had worn on though, the tree-filtered sun just starting to crest over the pine tops when Wyatt put his pipe down and walked back into the cabin.  Not finding her in bed had given him a small surprise, and he quickly determined she was not tucked away into any of the few corners and crannies in the cabin.  At that point he had assumed she was at the main house, although for what reason, or on what strange initiative, he could not begin to guess.  Walking in to find Lydia unpacking another large chest, he tried to be as pleasant as possible.

“Good morning.  Where is Claudia?”

Lydia took her time, pulling out some of Ambrose’s clothes and setting them on the table, picking up her tea to sip at it before answering.

“Why would I know such a thing?  That girl is your responsibility.”

“Yes.  Well, I haven’t seen her this morning and she is not in our house.  So I though she might be over here.”

“For what possible purpose?”

“Well, I wondered the same myself, but still this is the only other place she could be.  So you haven’t seen her?”

“I most certainly have not.  If I had, I would have sent her away back to you, you can be certain of that.”  Lydia placed her teacup back down and turned her back on Wyatt, who walked out the door and surveyed the land around the house.  He found it inconceivable that Claudia would have taken off by herself.  The girl had achieved a small amount of independence, and had shed some of her societal reservation, on the trip, but taking off into the woods or elsewhere seemed a large step up from that.  A strange and foreboding thought glimmered in his mind for a second, something he could not quite chase down.  His next thought was to ask himself if Isaac had taken her somewhere.  But why would he do that, especially given his own disliking of the girl?  And where would be take her?  Then Ambrose flashed through Wyatt’s mind and he thought he might be on to something.