Manny Barton was not exactly an appealing example of the human species.  At five foot four and two hundred eighty pounds, little of which was muscle, it was often difficult for people to imagine him stealthily creeping around businesses at night to break open safes.  He also wore clothes that were too big even on his large frame, had a mess of gnarled and habitually unwashed brown hair, and moved at what was described as the “breakneck pace of a lame snail,” by his brother.  Behind his back people called him slovenly although to his face they never used anything other than his name or its shortened form of Man.  He might not catch you quickly if you insulted him, but he would catch you, and then his large, fat hands would wrap around your neck and slowly crush your windpipe while he blew his garlic breath into your face.  That had happened to at least six people in the last few years, all of whom could still vouch for his manner of vengeance because Manny always stoped before he actually killed you.  He was strictly a thief and a robber after all, as his brother would tell everyone who asked about it.

Mickey Barton was a big man also, but in the impressive way, the opposite of his brother.  He weighed about two hundred and eighty also but was six foot six, broad-shouldered and barrel-chested.  He also was a murderer in addition to being a thief and robber, although Mickey did not have much patience for strangling people.  He just walked up and shot you if he thought you needed to be dead.  Both of them always dressed in black suits, Mickey’s well tailored and Manny’s oversized and hanging poorly over his various bulges.  Mickey answered the door to Leo’s knock.

“Got a few minutes to help me?” Leo asked, holding up the lock.

Mickey raised an eyebrow and replied in his usual clipped tone.  “Wh’t’s it for? Not the Shann’n job I hope?”

“It is,” Leo replied.  “I just need to understand how to get a lock like this open.”

By now Manny had walked up to the open door.  “Why?”

“Shut up Man, we don’t want to know.  We don’t want n’thing to do with that job.  It too dangerous.”

“I don’t want your help, well not directly anyway, just to show me how to open this lock.  That’s it.” Leo replied.

“What’s that lock got to do with it?” Manny asked, his small grey eyes peeking out of fat cheeks.

“It won’t hurt to hear what he’s up to brother, it don’t mean we’re gettin’ involved,” Manny interrupted.

Mickey scowled back at Manny and replied.  “It most certainly will mean that we are inv’lved.  Just knowing anything about that job is g’ing to be really bad for people’s health in a few days.”

“Come on in Lee, come on, I’ll talk to you about it.  Mickey can go hide for awhile so he isn’t privy to any of it.  Make himself feel better.”  Pulling on Leo’s hand to get him into the room, Manny waved his brother toward the bedroom door.  “Go hide Mick, go hide.”

Over the next two hours, interrupted only once by Mickey coming out to get a glass of milk, Manny taught Leo how to get the particular model of Sargent padlock open that Leo had bought with him.  The trick, as explained by Manny, was to be approach the picking of the lock very slowly and carefully, gently even.  Leo needed to “feel the delicate insides of the beast move” as Manny put it and to “understand that it is all just a matter of patience.”  The Barton’s had many different kinds of locks, all kept inside of a worn wooden chest, some of them cut open so Leo could examine exactly what he needed to do to get a lock to open up for him.  Once he had that down, Manny blindfolded him to simulate the darkness he would be working in, and eventually Leo could open the lock easily even with that handicap.  As he left, they shook hands with Manny cautioning him more loudly than necessary to “never mention that you were here to anyone,” a wry smile on his face as he closed the door.  As he walked away down the hallway he could already hear the brother’s starting to argue.

Leo sat around his place the rest of that day, going over as much of his plan as he could until he was sure that he knew every element of it and had planned for every possible contingency.  He drew a map of the route he planned to take with the car and then went out and walked that route, making sure that there was nothing going on in the streets that could cause an issue.  Once he was back at his place, Leo practiced the lock picking for another hour and then tried to figure out a way of getting the car out of its storage shed quietly.  He knew that starting it up was going to cause a problem as it would be nighttime and quiet, the men inside the Shannon house sure to hear the Renault engine firing up.  Letting it coast out of the shed in neutral was also out of the question as the roadway sloped down toward the Shannon property, meaning gravity would work against the weight of the car.  The vehicle was also much too heavy for one man to push along by himself.  So, with the certainty that he was going to have to start the car to get it out of the garage, Leo realized he would need to create some kind of a distraction.  He decided to take one more walk around the area and see what he could come up with as a plan. 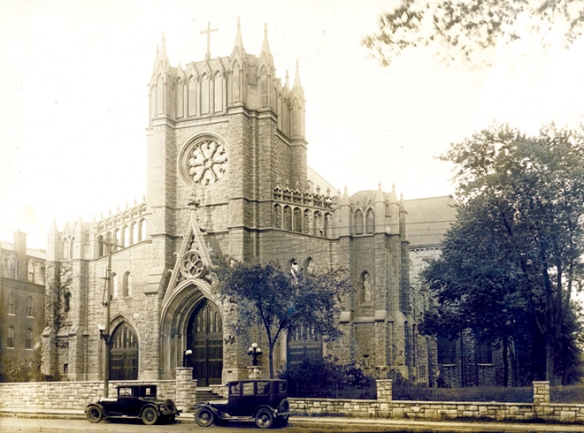 Joe Shannon lived on the southern edge of Kansas City, right off of Summit Street and near the Orphan’s House he had helped to build.  It was a quieter area of the town, removed from the bustle of downtown and also from the noise of the riverside docks and depots that were Shannon’s center of power.  He sometimes felt exposed out in the Summit Street area but his bodyguards made him feel safe enough and he greatly enjoyed the peace and quiet.  Leo could not come up with anything as he strolled along those tranquil streets, at least not until he walked past the Episcopal Church that was only blocks from the Shannon house.  That church had a bell tower and bell towers make noise.  And that solved Leo’s dilemma.