The night seemed to become even more frigid as he crouched among those trees, the cold washing quickly over his sweaty skin and forming a strange layer of frosty ice on his face and hands.  The shivers brought on by that quick freeze ricochet all over his body while he kept his eyes focused keenly out toward the road.  A car passed, and several minutes later another, and then fifteen minutes later they both came back, turning this time into the cemetery.  The vehicles patrolled the grounds and twice they stopped, men stepping out with flashlights and sweeping the beams over the dark recesses between the trees.  The searchers and their lights never came closer than fifty feet from Leo though, and his location and that of the Renault remained undiscovered.  After twenty-five minutes of driving around the cemetery the men parked both cars about one hundred feet away from the copse of trees and all got out to smoke cigarettes.  Complaining loudly about the cold, it also became evident that these men were in fact looking for whomever had stolen the Renault.  One large, bushy looking man brandished a shotgun as he explained what needed to be done to the culprit while the others worried about the consequences of returning to “the big boss” with empty hands.  Finally the men climbed back into their vehicles and headed off, splitting up as they exited the cemetery.

Leo had to admit that he was  very afraid at this point, the shotgun and leisurely description of what it was to be used for disquieting him and making his stomach uneasy.  Although he was already incredibly cold and certain he was going to end up with some pretty severe frostbite, Leo resolved to stay in the cemetery until it was time to stage the car on Christmas morning.  Hurrying back to the Renault with a faint hope in his head, he was rewarded when he discovered a blanket shoved under the passenger seat.  It was dark grey and made of heavy wool, large enough to cover him completely and keep him both hidden and warm.  Although he would have preferred the protection from the wind offered by the vehicle, Leo also did not want to be caught sleeping inside of it on the off-chance that these men came back and checked the cemetery again.  Settling down again into the trees, he wrapped himself up, tucked the edges of the blanket under his body and tried to think about being warm.

After about twenty minutes things got better, his body heat and breath trapped by the thick wool and creating a nice little pocket of comfort.  Eventually Leo drifted off a little bit although he was not warm enough to really fall asleep. He was in and out after that and constantly restless; warm and cold, worried and elated, tired and alert.  Five hours of this was all he could take and so, at five thirty a.m. on Christmas morning 1925, Leo stood up, collected his packages and walked back to the Renault.

It was not light yet although the eastern sky had just those first touches of the approaching sun in it, cold yellow hints of light flashing against the clouds.  He was not sure if the men had stopped looking, or if more had joined in as the night went on.  He did not know if the police were maybe involved by now, or if his bell ringer had squealed on him to someone in the Shannon gang.  What Leo did know was that if all of his risk, suffering and fright was going to be worth anything at all to him, he needed to finish the job.  Determined, he drove toward the river.

Luck was with him again as he encountered no one, not even a pedestrian on their way to an early holiday breakfast or a late returning night worker.  He drove all the way to Ninth Street and then turned left toward the railroad tracks.  He did see a few people then, all of them walking with their heads down against the crisp morning breeze.  No one seemed to be paying attention to him though, so Leo stopping hiding his face under a turned up coat lapel and focused instead on the end of his journey which was just six blocks ahead. 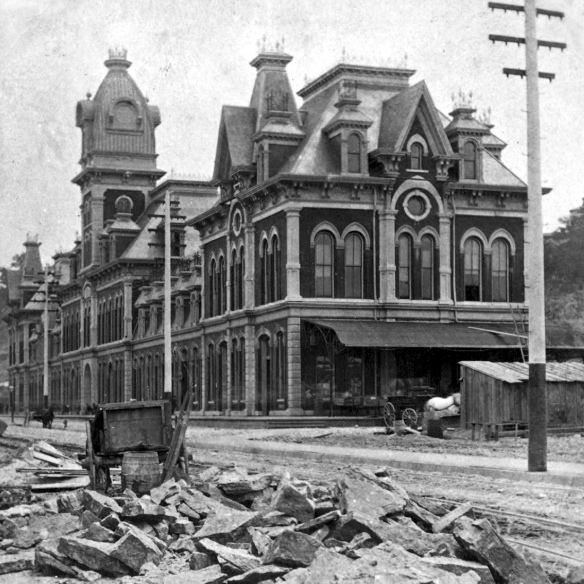 The old Union Train Depot had fallen into some disrepair since it was abandoned in 1914 in favor of the new Union Station on 25th and Grand.  That place had all of the attention these days, with its ninety-five foot ceilings and huge chandeliers.  The old depot though had historical significance to Kansas City and was especially important to the Rabbits.  Some of their businesses, both legal and illegal, were still run out of the broken down building and it was recognized as the gateway to the main Rabbit controlled areas down by the stock yards and freight houses.  It was for that reason it had been chosen by Leo as the place to leave Joe Shannon’s Renault.  Pulling up diagonally across from the Depot, so that the vehicle would block traffic on Lincoln, Bluff and Ninth Street all at the same time, he hopped out and quickly set up his props.

The sign he propped up against the windshield which faced directly into the traffic on Lincoln.  He then draped one of the dead rabbits over the front grill, it’s cold, furry legs reaching toward the silver Renault logo on the hood.  The other he laid on top of the fender of the driver’s side rear wheel, splaying its hind legs open and twisting the head so it seemed to be on backwards.  The sky was getting lighter now and a glance down Ninth confirmed that a few pedestrians were headed this way although it would be awhile before they arrived to view his work.  Taking a quick glance inside the vehicle to ensure he had left nothing behind, Leo allowed himself both a  smile and small shout of triumph before he strode quickly away down Lincoln.

Thirty minutes later he was sitting at the table of the Savoy’s restaurant and ordering Christmas breakfast.  As he ate that meal and then sat around reading the newspaper he did not quite comprehend the serious nature of his caper.  He saw it mostly as a prank meant to rub a little bit of dirt in the Rabbit’s eyes and embarrass their leader.  Pendergast knew in advance that it would be taken much more seriously than that by Shannon, which is exactly what happened.  As Leo relaxed and sipped coffee, an enraged Shannon, who had been forced to miss the annual Christmas breakfast he hosted for his constituents, was already well on his way to figuring out exactly who was responsible for insulting him.