Elmer Plumb was an interesting man in his own right but had an even more interesting father, Elihu Plumb.  That man, along with his brother William, their father Alva and all the members of their various families had traveled from Wisconsin to Rocky Prairie, Washington in 1861.   They were part of the first pioneer group to travel via Mullen’s Military Road and one evening that wagon train ended up camped out with a large group of Bannock Indians during their journey west.  That night, with the Indians restless and threatening to take action against the pioneers, the Plumb family men had tried to borrow some ammunition to protect themselves but were refused.  Exactly how or why they had none of their own, especially given the norms of the time, is lost to history but they did manage to survive although it was a rather nervous night.  At some point after three a.m. the Bannock’s made off with some of the oxen and supplies from the wagon train but never attacked the group.  After a few more misadventures they all arrived safely in Washington and the  family set up a homestead and began to try to make a living.  Over time Elihu would become recognized and revered as one of founding fathers of the Olympia area.   Along the way Elmer Plumb was born in 1863 and although he worked the family land until he was twenty, he then headed out to Olympia to seek his own way in life.  Much later, after a wide variety of ventures in that city, some successful and some not, he opened up a cigar shop on East Fifth Avenue.  It was a respectable business and provided a good living for Elmer; however, his entrepreneurial nature was always on the lookout for opportunities.  The advent of Prohibition brought such a opening, and he quickly converted the storage area of his store into a speakeasy.  Those establishments, some of them abided by law enforcement and some not, provided the liquor that the public continued to crave despite the nationwide ban on its sale.  Elmer made sure that he was on the good side of the Olympia police and because of that enjoyed a bustling business in his former storage area. 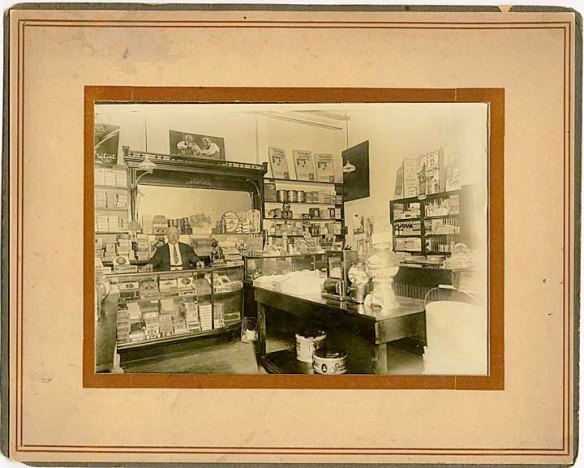 Elmer Plumb at the register of his cigar shop in Olympia

The front, legal side of Plumb’s Cigar Shop was of a typical arrangement for the time.  The shelves were crammed full of boxes of cigars and the various accessories that went along with that habit.  The most prevalent item not related to smoking that he sold was candy, most of it being dispensed from penny gum ball machines.  It was a simple, quiet and legitimate business and, although there was a door which allowed Elmer to slip into the other side of his operation, everyone else entered the speakeasy via the alley.

Elmer Plumb at the counter of the other side of his business, the speakeasy in the old storage area. Note the keg in the far back corner.

Once you had given the appropriate password at that back door you would step into a narrow passageway that ran alongside a counter which Elmer had installed for his alcohol seeking clientele to step up to and order drinks.  The shades on the windows were always drawn down, although small slivers of light filtered in through the top and there were cans on the floor into which customers could toss cigarette butts and exhausted cigars.  He sold candy on that side also and still retained his cigar shop supplies on the shelves along the back wall.  This was not the kind of noisy speakeasy that was popular in other cities where prohibition was looked at mostly as an inconvenience.  In Olympia, although the police allowed them when the money was right, they still needed to be discreet and hidden.  At Plumb’s you got your drink and carried on quiet conversations with your fellow lawbreakers.  Parties were strictly reserved for private residences.  At five-thirty p.m on January 25, 1926, when Veronica and Leo stepped through the door, three other men and one woman were already enjoying an early evening libation.   Elmer Plumb stood behind the counter polishing a glass and looked up when they entered.

“Hey ho Mr. Plumb!” Veronica called out along with giving him a little wave.  “What’s new?”

Elmer pushed his glasses up further onto his nose and replied. “I can’t say too much, dear.  Things are the same as always.  Now, who’s this new fella?”

“An old friend so don’t worry.  Leo, say hello to the owner of this fine place, Mr. Elmer Plumb.”

Leo gave a curt nod but said nothing.  Veronica poked him in the ribs and said, “Now Leo, you’re not going to make yourself any friends acting like that, especially in a place like this.  You want to be social and friendly so say hello.”

“Hello then,” Leo replied and forced a slight smile onto his face.  He still was unsure about being in the speakeasy, not from any sense of morality but because he did not know anyone there except Veronica.

“Come on Leo,” Veronica said and then whispered into his ear, “if you want to do some business in this town you better get used to these kinds of places.”  With that she stepped further down the passageway eventually stopping next to a tall, thin man with a red complexion and a fat, twisted nose that had obviously been broken several times.  The man, Jerry Salazar, was the only mixed-blood gangster in Olympia who was allowed to operate without interference from the other criminal operations in town, all of which were run by white men.  It probably helped that he looked more like the boisterous Irish men that populated his mother’s side of the family.   It could also have been because Jerry was a ruthless killer who had eliminated sixteen family members of gangs that originally tried to run him out of Olympia.  He had everyone’s attention and respect.   Elmer slid a glass of champagne across the bar to Veronica as she turned to the tall man.

“Living large as you say Ronnie, living large.  What’s this quiet fella all about?”  Jerry had a slight accent to his speech, a small drawl from somewhere in the southeast.

“He’s alright Jerry, someone I met in the McNeil days.”

Veronica turned to Leo.  “You better get something or else everyone in here is gonna think you’re with the bureau.   Izzy and Moe might be gone but nobody trusts a person who’s not drinking.”

Izzy Einstein & Moe Smith in one of their famous disguises – they used them to catch unsuspecting violators of the Volstead Act during prohibition. They were both dismissed from the Bureau of Prohibition in 1925 even though they had racked up thousands of arrests with their methods.

Leo turned to Elmer who was already sliding a whiskey across the counter.  He took it and then Veronica introduced him to Jerry.