The man seemed to pick up on the implied insult and his cheeks flushed a little bit but he regained his composure after a few shallow breaths.  Leo seemed pleased by the effect of his words.

“Well, yes I suppose you might think that but people can be more than what you may judge them to be initially.  I have connections here, close ones.  My brother-in-law Otto, it’s his place, well his and his brother Louis I suppose, but he died a couple years ago.  Otto’s had a rough time of it, managing the hotel himself and getting older all the time.  He asked me to come up and help to run this place.”  The clerk’s voice was proud as he spoke although his eyes lacked the strength of his words.

“You?  He asked you to come up here and help him?  At this fine place?”  Leo’s tone was derisive and harsh.   The man’s ears reddened and he rubbed his hands together nervously before replying.

“Yes, well, yes of course he did.  I have experience you know.”  A short silence followed with Leo drumming his fingers on the desk.  The man looked down and continued talking.  “Well, I suppose that maybe my wife talked him into it.  She’s quite close to him, you know, and worries about his health.  I’m quite capable of doing this though, of working here. Quite capable.” 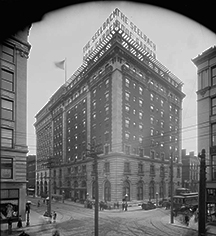 And so he was checked in and started a short residency at one of the most popular places in the country for gangsters to visit, play cards, relax and of course, scheme.  Leo felt that he needed to make a strong play for attention from these men and spent most of his remaining money on two things: nice clothes and setting himself up as a fence for stolen goods, hoping to pick up some action from the guests at the Seelbach.  He inflated his credentials and added events to his past experience as he always did, although this time he was careful to follow the false timeline and life story he had developed in Selma.  He made sure that those he talked to had the proper story to bring back to the big-time gangsters. He also picked up several female companions within his first few days in Louisville and promptly fell back into his routine of social outings and romantic interludes.  The letters back and forth with the women also continued and he also wrote to Olivia informing her of his new address.  He was not quite sure why he did that except that he was thinking of her occasionally and it gave him a sense of connection, his only one, to his family and roots.  That seemed to be mattering more to him than it had in the past.  In that letter he also inquired if Stanley was still in New Munich and asked again for a new check to be sent to him.  His current operation was proving quite expensive and he needed all of the money he could get so that he could keep it running and gain a reputation that would get him noticed.  He did not tell Olivia that of course, as he knew it would only make her angry.  He simply stated that the money would come in handy.

April of 1928 went well for Leo and by the early part of May he had attracted the attention for which he had hoping.  A member of Dutch Schultz’s operation approached him one night at the hotel, pulling him into a corner of the hotel’s restaurant.  They spoke for about twenty minutes, with the man being slightly cagey with details, but making it clear that Leo was being looked at and might be given a test job soon, to see if he measured up to expectations.  Leo walked away from that meeting beaming and positive that the future was looking bright.

Ten days later, and before he had received any kind of a test from the Schultz gang, Leo woke up feeling weak and nauseous, symptoms that got worse as the day wore on.  By seven p.m. he felt poorly enough to ask that the hotel find him transportation to the hospital.   They did so promptly and he was admitted around seven forty-five that night.  The next morning a doctor delivered some unwelcome news to Leo, namely that he had diabetes and it was severe enough that he would need to take medication for the rest of his life.  That did not sit well with Leo, who disputed the idea that he was diabetic and asked to have the tests run again.  When those results came back, confirming the diagnosis, he lashed out, calling the doctor an incompetent fool as the man walked out of the room.

The real problem of course was that Leo found the idea that he had any medical issues at all to be a blow to his criminal credibility and future plans.  He felt it was a weakness that others would use against him and that would prevent them from looking at him as the big-time boss and gangster that he wished to be.  Also, being sick and weak, especially if that came up during the commission of a crime, was not something that was going to be acceptable.  It was undignified and unbecoming, or that at least is how he described it in a note written to Olivia two day later.  That letter was never sent as Leo really had no wish for anyone to ever know about his diabetes and he vowed to maintain that secret at all costs.  He did accept the medicine from the hospital, or at least he did after initially refusing it and then finding himself back at the emergency room four days later.  It was a fact of life he would deal with while keeping it a secret from everyone.  From that day forward he gave himself shots behind closed doors, spoke little of it (although it would come up and be known during some future incarcerations) and moved on with his plan to be a big time gangster.  Soon after his trips to the hospital Leo was back to running the fencing operation, had passed the test from the Schultz gang and was formulating another scheme that he hoped would bring him a good amount of quick, easy money.  It would be that scheme though which would lead him back into the prison system.