The young girl had worked herself up into a really frenzy by the time Olivia’s mother picked her up, although it was all soon better following  some milk that was administered via a wet rag and a change of clothing.  As she rocked the infant back to sleep she closed her eyes and sighed deeply knowing that Olivia’s awakening, whenever it came, would bring another difficult moment. 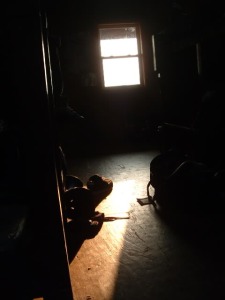 The old woman slept fitfully in the chair for several hours, occasionally reaching over and placing her hand on the infant girl’s chest to sooth her or feel her breathing.  She also went twice to check on her daughter who remained peacefully asleep, the temperature of her forehead easing and the flush of her skin fading away.  Fully awake after the last check on Olivia, she sat in the chair wanting coffee but weary enough to keep putting off going to make it.  The sun slowly crept up, its light streaming in the kitchen window and slowly moving down the hallway toward the bedroom.  She watched its progress and when it had crossed the threshold of her room she rose and went to check on Olivia again.  Finding her still resting, she began to straighten up some of the remaining mess from the delivery and the events of the night before.   Several minutes later her daughter whispered a faint greeting.

“Good morning Olivia.  How are you feeling?”

Smacking her lips together and rubbing her throat, Olivia replied, “sore, very sore and so thirsty.  Is there water in the pitcher?”

Pouring a cup in response, the mother checked her daughter’s forehead as she drank.

“Better than what?  And where is my baby?”

“I, well,” and then she paused, her face falling and a wail escaping her mouth.  “My baby, what happened?  Please tell me!”

“Shh, your daughter is well, she is well.  You don’t remember last night though?”

“Bring her to me mother.  I want to see her.  Where is she?”  With that, Olivia started to get out of bed, however her mother placed a hand on her shoulder.

“Don’t stir from bed.  You had a difficult night even if you don’t remember it.  I will bring you the child.”

Olivia complied, although the eagerness in her face certainly meant she would not do so for long.  Realizing that there was no way to put off the revelation any longer, the old woman walked toward her room, thoughts running through her head.  Was there a way to lessen the pain from what Olivia was about to discover?  How would her daughter deal with what might be seen as a failure of a mother’s womb?  Should she tell her first or let her discover it for herself, as it certainly would not take long for that to happen?  Reaching the cradle she picked the infant up and spent several minutes putting it in fresh clothing and diaper, then wrapping her up in the blanket.  Finished, and with Olivia calling for her from the other room, asking what was taking so long, she took one more moment to hold the young girl close to her chest.

“You are a beautiful girl, you always will be,” she whispered softly and then wiped a tear from her cheek before heading toward Olivia’s room.   Her daughter’s eyes lit up when she entered and she stretched out her arms, her fingers waving the baby toward her.  Handing the infant over, the old woman settled into the chair.

Several minutes passed as Olivia nuzzled her newborn close to her face, and then spoke baby-talk as she brushed the infant’s cheeks with her right hand.  She turned toward her mother as she began to remove the blanket.

“Was the labor difficult mother?  I do have to admit that I do not remember much if it.  The doctor was here, I know that, and I hurt so badly when I felt I had to push.”

Olivia’s mother paused before replying, reflecting on the experience that her daughter had been part of but for which she possessed no recollection.  She would not say it aloud, however she did in fact believe that this did diminish the motherhood experience.  If this trend caught on, this need to remove yourself from life’s trials and pains with drugs, then she had some serious doubts about how the future might look for civilization.  For now though that was mostly water under the bridge and she responded to Olivia.

“It was no so bad daughter.  You were in some pain as you remember, however not much more than…,” and she paused, decided to skip the point and then continued, “ well, it wasn’t too terrible.  But then the doctor gave you that gas and, well you were pretty much gone after that.  The baby came after awhile and I cleaned her up.”

“You should have let the doctor do that mother, the doctor is supposed to check the baby once it’s born.”

“Olivia, I don’t know what you may have read or been told, but that man was most certainly not going to clean up a newborn baby.  He handed her to me the instant she was out and the cord cut and didn’t seem much concerned after that, not until I had her fixed up anyway.  He checked her breathing and, well a few other things and then he made sure you were well before trying to give me a lecture on caring for you.”

“You did listen to him?”

“I took care of you all last night Olivia, and it wasn’t good let me tell you, yet here you are, well and fit.  That’s enough said I believe.”

Her daughter ignored the comment about the struggles through the night.

“The doctor said she was well, yes?  All her parts, fingers and toes?  Healthy?”

Sighing deeply her mother responded.  “Well, she’s healthy certainly.  And she has all the fingers she can have.”

A blank look from Olivia was followed by her frantically tearing the blanket off the baby girl, who she soon discovered had no right arm. 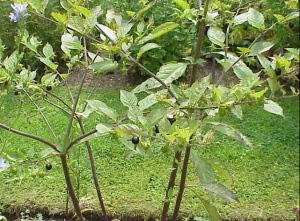 The jar that she withdrew had been prepared several months ago, which she knew mean that it was now very potent, well past the minimum dose practices that homeopathy advocated.  Dr. Martin had told her to always have a belladonna solution prepared and ready, but to not let it sit for more than two months.  He regularly sent her new herbs with which to prepare tinctures and she was usually faithful about making new ones, allowing them to mature for several weeks and then discarding the older solutions.  During the last few months of Olivia’s pregnancy however she had skipped several of these rotations, believing that it may be necessary to have very strong medicines available as her daughter came to term.  She had seen some very rough births over her many years and was determined to have remedies that could aid her daughter regardless of Olivia’s personal beliefs about the matter.

She remembered the day that she had prepared this particular tincture, a stormy morning about three months ago.  During its preparation she had told Olivia the story of the last time she actually needed to use a belladonna solution.   It had been several years ago, the final time she had seen her brother Michael alive and shortly before she left Maine to follow Olivia to Hiawatha.  He had arrived at her house complaining of a headache and several days later this had worsened enough to confine him to the only bed in the house.  She had given this up to her brother after finding him writhing in pain on the floor of her sitting room. Up until that point he had been staying at the Price Hotel and visiting with his sister during the evenings, an arrangement that allowed him to prospect for business with the local Indian’s during the day.   Michael fashioned himself an Indian trader although he had little to show for it after years of chasing various tribes around the eastern seaboard.  Concerned about his increasing pain, and knowing that he frowned upon the medicine they had grown up with, Olivia’s mother had slipped the tincture into a cup of tea.  Relief had followed, although Michael voiced his suspicion before he left about how his cure had been affected.  She had hugged him goodbye and told him not to worry so much as he likely had just gotten over it by resting.  Olivia listened intently to the story, although she interrupted several times to lament the time her mother was wasting preparing remedies with little proven benefit.  Her mother had a lifetime of proof, some of it validated by cures affected on her daughter,  although that seemed to matter little to Olivia.  As she worked they alternated, the mother telling her story and the daughter lecturing on medical advances.

She had prepared the solution so many times that she hardly looked down as she worked.  Taking a belladonna plant from the rough cloth bag she kept them in, she placed the entire dried stalk into the mortar, several of its neatly tapered leaves and faded purple flowers peeking above the rim.  As she reached in and crushed it with her hand she could feel the brittle black berries as they broke off their stems.  Reaching for the pestle, she ground the plant for several seconds, just enough to ensure it was broken up sufficiently to release all of its medicinal qualities.  Once that was done, she placed the crushed pieces into a small jar and then filled it with grain alcohol, placing a small bolt of cheesecloth over the top before sealing it tightly with the lid.  After that it was placed into that far corner of the cupboard where it rested and gained potency until it was needed.

That time was certainly now, as Olivia’s cries continued and she could hear the bed banging on the floor as her daughter thrashed around.  Unsealing the jar, she quickly tied a string around the cheesecloth to keep it attached to the opening, then decanted several tablespoons of the liquid into a tea cup.  She was under no illusions that Olivia would drink a secret solution as her brother had, and the tincture was too strong for that in any event.  Carrying a teaspoon and the cup, Olivia’s mother returned to the bedroom where she found her daughter standing at the foot of the bed, naked now but wrapped in a sweat-soaked sheet and wailing.  No discernible words were being spoken, just anguished cries of pain.  Setting down the spoon and cup, she slowly went over and guided her back, where she slipped a fresh nightgown over Olivia’s head and then helped her sit down on the bed.  She waited a few minutes for her daughter to quiet down and then she recovered the cup and carefully scooped out a spoonful of the medicine.  As she turned back, the wailing started again, fear flashing in Olivia’s reddened eyes and she shouted a refusal to cooperate.  Her mother took advantage of her opened mouth, spilled the medicine under her tongue and then dropped the spoon so she could hold her daughter’s mouth closed with both hands.  A struggle followed, one that was won by the mother when Olivia reluctantly choked down the solution of belladonna.  Five minutes later she was much quieter and had stopped moaning, easing back onto her soaked pillow, which her mother quickly replaced.  Just as Olivia was falling back asleep another dose was tipped under her tongue, and then her mother was finally able to attend to the infant.