Olivia gasped in surprise, her right hand fluttering slightly as she placed her teacup and saucer onto the porch railing.  Her cheeks flushed bright red as she stood up.

“He is coming over here?”

“Yes dear, over here.  I thought we might entertain him for supper this evening.”

“He agreed to that, to come over here?”

Without another word Olivia bolted into the house while her mother settled back into the rocking chair with a faint smile on her face.  She remained sitting there until she saw Tom Drummond coming up the road, dressed as always in a nicely tailored brown suit and carrying a small bouquet of flowers.  He was a tall man for the time, standing over six feet and had the long legs and arms to match his height.  Although he walked with a slight limp, an after effect of a childhood dare, his stride was purposeful and strong and he was quickly on the porch, doffing his hat and offering the flowers to Olivia’s mother.  She took them without rising, patting his hand and remarking on his punctuality.  He then offered her his arm as she rose and they both walked into the house.

They found Olivia standing formally behind the large chair in the drawing room, dressed now in a delicate blue dress with cream lace accents and a high collar.  Her hair had been throughly brushed and was now pulled back on the sides and lay in gently curled ringlets down her back.  She gave a slight curtsey as Tom and her mother entered the room, offering him a seat with a wave of her hand.  After pouring drinks Olivia sat down also and pleasant conversation passed between the three of them, words that Olivia took directly to heart but that would have been unremarkable to most other people.

As they moved onto supper Tom lapsed into telling tales to Olivia’s mother, both about the journey out from Maine and his exploits in his younger years as a sheriff’s deputy in Virginia.  Olivia said little, eating her food in small bites just in case she had to speak up or offer a thought to the conversation.  That only happened once however, as she expressed her own desire to see the outlying parts of the Hiawatha community left as a buffer between the town and the Indian tribes in the area.  As Olivia served the dessert, a rhubarb pie made the day before from freshly harvested stalks, her mother took the opportunity to excuse herself, stating she was too full for dessert and too tired to try eating it in any case.  As she left the room she kissed her daughter gently on the cheek and offered her opinion that a walk might be a nice way to end the evening.

After she was gone Olivia sat down again and her and Tom ate the pie in relative silence except for his remark upon its delicious taste.  As she cleared the table he leaned back and looked at her until she stopped to return his gaze.

“It was an excellent meal Olivia and I thank you for having me here for it.  I enjoyed the company of you and your mother.”

“Thank you Tom, and it was a pleasure.”  The awkwardness of the moment was not lost on either of them, Olivia rubbing her hands together while Tom played with his watch chain.  Finally he stood up and extended his arm.

“It will wait, I am sure.  Let’s enjoy the evening before it gets too dark.”

Olivia paused, her pulse racing as she looked at Tom’s offered arm, then she collected herself as best she could and replied, “Yes, very well, let’s enjoy the evening.”

They stepped out onto Shawnee, Olivia wrapped again in her purple shawl, her left arm gently twined around Tom’s right.  They walked in silence for several blocks as she fought through a tangle of thoughts in her head; memories of the past, wishes and wants for the future, fear of rejection and lack of confidence in herself.  Finally she convinced herself that maybe, just this one time, it was worth it to to be bold.

“You know Tom, I often wonder about whether you truly have any interest in me.”  As she said it, Olivia could hardly believe she had summoned the courage to ask and her pulse was racing again, waiting on his reply.  He took a minute to do so, finally reaching over with his left hand and placing it on top of her arm as he spoke.

“I do Olivia, I do.  I actually have always had quite an interest in you.” 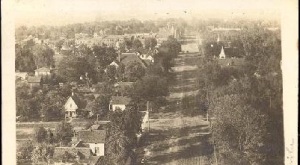 As he said this they turned onto Delaware, the sides of the road lined with some of the sturdy maple trees that had been such a prevalent part of the land when they arrived.  Olivia had been one of the settlers who advocated for keeping these trees in place whenever possible, and she thought of it as one of her major contributions to the town.  At the moment however she hardly noticed them, as Tom’s simple response had flooded her mind with new, but still very confusing thoughts.

“Why then have you always put us off, put me off?  I know I may have been a shrinking violet at times, however surely you could have made some of your intentions known.”

Tom stopped, turning to look at her, his eyes filled with a mixture of desire and remorse.

“I just cannot, I cannot pursue this intention toward you.”

Olivia returned only a slightly hurt look, waiting for him to continue.

“I cannot, as I am married, back east where I came from, I am married still to a woman from whom I have been unable to remove myself.”

© Jack Mesenbourg, 2011 – 2020 Unauthorized use and/or duplication of any material, content or published works without express and written permission from this website’s author and/or owner is strictly prohibited. Excerpts and links may be used, provided that full and clear credit is given to Jack Mesenbourg  with appropriate and specific direction to the original content.