The town still seemed fresh in 1880, having only been plotted out twenty-three years prior by the founding fathers.  Those four men were still revered around Hiawatha and just saying the names of Coe, Wheller, Morrill or Drummond in the wrong tone around the community was bound to get you into an argument.

That would have been especially true at Leaders Dry Goods and Clothing, which was run by Olivia Good and who had been part of the original group of people who had traveled from Maine to settle the verdant part of Kansas that they all now called home.   She was a typical frontier woman, short and durable, pale-skinned and with long brown hair that she often piled on her head to keep it out of her way while engaged in work.  Olivia had a particular affection for Tom Drummond, a man with whom she had flirted for most of the past two decades to little avail and much frustration.  She managed to keep most of that in check however, as he always put her off in the nicest way possible.  Perhaps the next time would be the charm.  That was how she always explained it to her aging mother, a vibrant ninety-six year old whom had followed three years behind her daughter on the road toward the midwest.

As they would sit together on the wrap-around porch of their home at 704 Shawnee, sipping tea into the evening hours, her mother always shared the same thought.  Olivia should have nailed down Tom Drummond when the two of them were involved in plotting out the streets in Hiawatha, carefully naming the main thoroughfare Oregon and the streets north and south of it after Indian tribes in the area.  She should have nailed him down good and proper when she had the chance and then all of this silly school-girl chasing around would not have been necessary.  Olivia often wondered exactly what her mother meant by nailed down, however she chose to take it in its most innocent form.  It was probably true that she could have acted with a little more determination and a little less subtlety at several points along the way.  At this point however she was mostly stuck with the current situation as she believed it much too late to be anything other than modest.    On that point at least her mother agreed.

It was not then a shock to many when, on a uncommonly cold July afternoon, Olivia ended up in a heated discussion with a new ranch hand who had come into the store to purchase trail gear and sundries.  The man wanted a particular make of saddle coat, which the store did not carry, and this led to his announcement that Hiawatha was about as backward of a frontier town as he could imagine.  Olivia had stepped from behind the counter, trying to smile through pursed lips.

“Whatever do you mean by that?”

“I’ve been in this place for three days and so far all I get from any of you all is, we don’t have that.  I heard it at the drug company, the coal shop and hell I even heard it at the Baptist church.”

“You’ll watch your mouth in here sir.  We don’t tolerate you cowboys coming in here and fouling up the air with your trail talk.”  Over the shoulder of the young man Oliva could see Sam Potter, the owner of the store, giving her a hard stare.  This would not be the first time that there had been a confrontation in his store because of her and he had warned her that the next time could well be her last.  It was driving business away he had explained, as word was getting around that his store had a sharp-tongued devil working in it.  That discussion had not had much of an effect on her at the time and his look had little in the moment.  She continued.

“Now, as for Hiawatha, I will have you know that we here are one of the fastest growing communities in this area.  Just two decades ago there was nothing here except the Indians and since then you have all of this, all of this that is around you here.  Come with me young man.”

The ranch hand seemed to have had enough.  “Ma’am if it’s all the same to you I will just be on my way.  No offense and apologies for the language.”

Olivia took his hand and Sam Potter buried his face in his hands, taking care to remove his glasses first.

“You come with me young man.”  She led him out the front door, pulling him along by his fingertips.  He could have easily disengaged, however at this point likely thought it was not going to be of any real assistance in his current situation.  When they were outside she stood beside him, hand on his right shoulder, and waved her arm down the west side of Oregon Street.

“Look down these streets young man.  Do you see all we have to offer here?  The mercantile, the doctor’s office, the drug company.  Look right above Yates there, you see the bank.  That is the bank of Barnett, Morrill and Janes, our own financial house right here in Hiawatha.  And then here,” and she turned the man to look east, “the hotel and the telegraph. See them?  And the churches?” 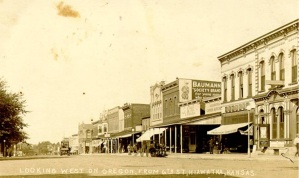 The man raised his left arm in an awkward partial salute.  “Well you have it all then I guess.  Quite the fancy place you have here.  How could I have been so wrong.”  The mocking tone was evident to the small group of people who had stopped on their way past the store to see the scene play out.  Abel Murray, who knew Olivia well, whispered something to his wife who just rolled her eyes.

“You be respectful young man.  We have a good town here, better than whatever hustle and bustle city you come from and we have plenty that good people want.  You go find your fancy saddle coat somewhere else!”

The man took her advice and left, leaving behind a muttering crowd that soon dispersed and Olivia, who remained with her hands on her hips at the door.  Sam Potter came out three minutes later and told her to go home and never come back.