Both of the captured criminals were taken back to the Stearns County Jail, the irony not being lost on either of them or the officers involved in their transport.  As the in-processing of Leo was being finished a short, balding man with grey hair came through the door accompanied by the jail supervisor.  After a short comment from his companion, the short man walked right up to Leo and introduced himself as Earl Foley, a state inspector.

“What’ya think I care about that for?” Leo snapped back, not shaking the man’s proffered hand.

“Well, I hear you’re the man who made it out of this place.  Must think you’re pretty clever.”

“I’m clever enough to have beaten these dumb Dora’s, aren’t I?”  Leo wiped the ink from the fingerprint process off his fingers and glared back at the man.

“Bet ya that you can’t make it outta this place a second time.”

Leo sneered at the man before replying.  “Tell ya what, you give me thirty minutes alone in that corridor and I’ll take that bet.”

The man, nonplussed by the bravado, walked away, leaving Leo to snicker at him as he was grabbed by a deputy and escorted to a regular cell.

So concluded what had been a very full day for him and he settled back into the hard cot with resignation and weariness.  Nine days later, on October 25th, he was in court for a preliminary hearing during which immediate charges were not pressed for the second robbery.  Instead he was bound over for sentencing in regard to the first Meier Grove bank job to which he had confessed.

His partner Joe Hendricks also was not immediately charged for the second Meier Grove robbery.  Instead, he pled guilty to the St Michael’s robbery, the one he was being held for in Stearns County when he escaped with Leo, and was sentenced to life in Stillwater State Prison.  He was joined there on December 26th of 1929 by Leo, who entered as prisoner number 10038.   The prison would be his home for quite some time but it would not hold him forever. 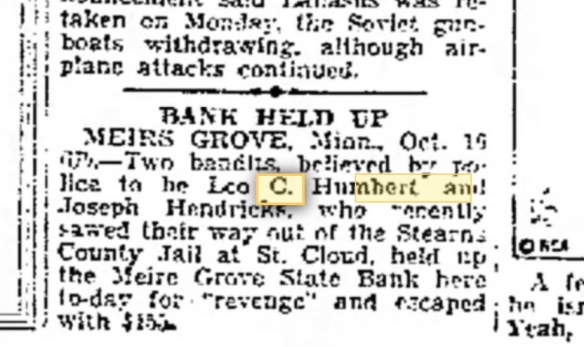 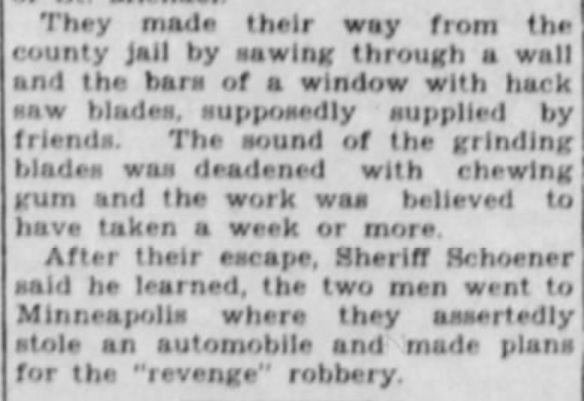