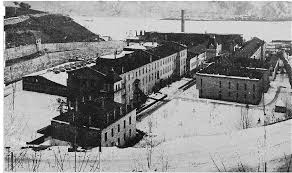 As Leo settled into his life at Stillwater Prison he turned to his usual practice of playing up his criminal credentials, all of his exaggerations now augmented with some of the recent real-life escapades with which he had been involved.  He was a bit of a minor celebrity due to the double robbery of the bank in Meier Grove and he took every opportunity he could get to tell the story of his act of revenge.  Occasionally the details of his tale would be contradicted by Williams, who seemed more content with the actual version, but Leo’s personality was much louder than that of his partner.  As such, he managed to become known as a player of some importance within the society of prisoners while Williams faded into relative obscurity.  In his free time Leo continued to read civil engineering books, play cards and write letters to various women, some of whom he had known on the outside and some who were lonely heart types that wrote to prisoners at the prison.

He did have several issues with his diabetes during his incarceration, although he usually self-reported when he was feeling ill and refused to be seen for any kind of regular treatment.  For this reason, although the individual incidents were recorded by the medical staff, no formal entry was made in his prison record to indicate he was a diabetic.  Leo was generally well behaved and there are no indications that he was ever disciplined for violating major prison rules or causing any issues.  In fact, the major entry in his file involves him protecting another inmate during an exercise yard fight.  During that incident Leo shielded the man, who already had a broken arm suffered during a previous assault, from a group of four prisoners who were intent on either killing the man or causing some further severe injuries.  It is noted in the file that Leo’s action, “likely saved Foster from death.”

One issue that Leo spent a lot of time thinking about, especially in the early morning hours and before going to sleep at night, was Otto Knaack and the Marlborough Hotel.  He had certainly stewed, ranted and raved about it before but during his time in prison in the 1930’s this became a full blown obsession. Leo became even more steadfast in his belief that Otto’s actions and the hotel’s cooperation with the authorities had robbed him of his prime years as a criminal, interfering in the growth and improvement of his skills and reputation.  He believed that without their interference he would have gotten away with the initial robbery in Meier Grove and gone on to further success, happiness and most importantly, noteriety.  Leo wrote many letters, full of threats and promises of revenge, only to tear them up once he had completed them.  He did want to do something to make the hotel and the janitor pay though, and this time he wanted to make sure that it worked out the way he intended. 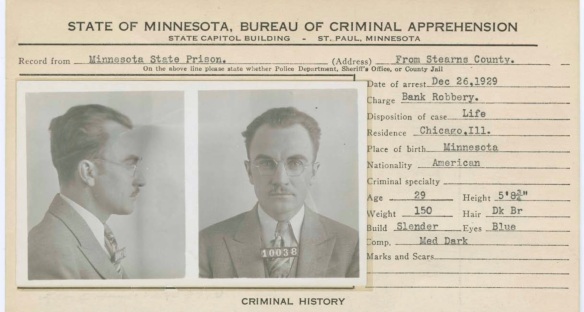 As the years went on, Leo’s features changed of course and he went from looking like a rather severe-minded accountant to the appearance of a middle-aged salesman.  His hairline receded a little bit more, although it still stayed a dark chestnut color and his eyes remained alert and intense.  Some of his fellow inmates would say that when he had his glasses on he looked like FDR from the side, but Leo always scoffed at that. He would tell them that his nose was much too sharp and he was not, after all, a Democrat anyway.

Time moved on and as October of 1937 approached Leo was informed that he was going to be up before the parole board the next time that it was in session.  This caught him by surprise, as he did not believe he was eligible until 1939 but was told that the warden had actually recommended him for early consideration.  Apparently this was due to his good behavior, as no one including Leo could come up with any other reason why the warden would have taken this action.  He had done nothing to especially ingratiate himself with the man during his time at Stillwater.

Leo prepared himself well though and when he went before the board he made a very positive impression.   He talked about “going straight”, finding a job in the civil engineering field that he had educated himself in, and played up his protection of Jack Foster during the prison yard fight.  The board president asked him a few questions about how he planned to stay away from crime and seemed satisfied with the answers.  After he was dismissed from the hearing Leo went back to his cell feeling like things had gone well.  He received confirmation of that over the next several days and became convinced that he would be paroled when the board announced their decision in late November.  That belief got him more focused than ever on plotting out specific ways to enact revenge on Otto and the Marlborough.

Leo went through a long list of possibilities in regard to accomplishing this goal, a few of which he planned out in much greater detail than others.  He wanted to stay clear of a murder charge but stilll included a plan to run down Otto with a delivery truck and another one which involved poisoning the janitor and starting a fire in the hotel’s main administration office.  In all his plans though he was very focused on Otto and the hotel itself and abandoned ideas that would involve too much risk of hurting other guests and residents of the building.  On the afternoon of November 15th Leo was playing cards with two other inmates during their time in the exercise yard when a third man approached the group.  He was a tall, thin black man with closely cropped hair, walking with a slight limp and whistling softly.  Leo did not recognize him and one of the men he was playing with commented that this inmate had just arrived yesterday.