“You’re new.” Leo commented when the man stopped just a few feet away from the table where they were playing cards.

“I am, just yest’day in fact, over from Ramsey jail.  On a robbery charge.”

“You must’a been found guilty then,” one of the other card players commented back.

All three of them men playing cards chuckled.

“Ain’t they all,” Leo commented before motioning to the man to sit next to him.

After another hand of the card game was played Leo took up the conversation again.

“Leo,” he said, pointing at himself, “and that bald-headed fella is Larry and then Mike.”

“James Fillmore, but call me Jimmy.”

“Where you come from originally?” Mike asked.

“How’d you get pinched on your last job?” Leo asked.

“Hell, it was that damn explosion that did us in.  Christ, what a mess that was, almost blew up the whole damn place.” 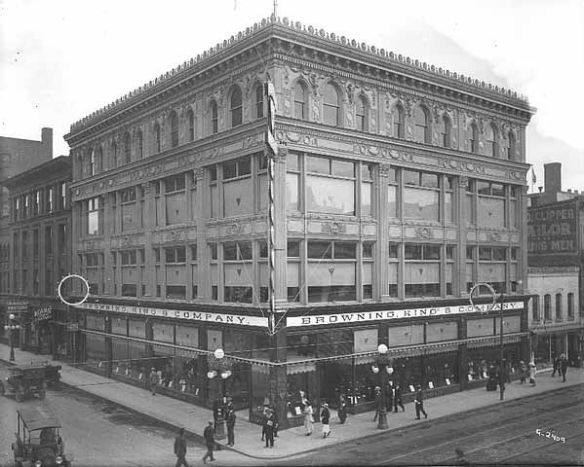 Jimmy went on to relay a story of the safe-cracking crew he had been working with and their attempt to break into the vault that was within the Browning, King and Company store in Saint Paul.  He had done two previous jobs with the same crew except that this time they brought along a new member, a fellow that they called the Clockmaker.  After a question from Larry about what they needed a clock repair man for on a robbery job, Jimmy informed them that this man actually was an explosive expert who apparently fixed clocks as a hobby.

“At least they all thought he was an expert.” Jimmy said.  “That lasted right up until he set that charge off, supp’sed to just be enough to open that big ol’ safe.  Instead, blew up everything in sight and almost killed every damn one of us.  We ran like hell out of that place but people were alr’dy in the street and the police not far behind.”

“Funny, I knew a clockmaker once,” Leo commented, “he was an odd fellow, getting a little crazy I think when I last knew of him.”

“This fella seemed a bit off for sure, mumbled to himself a lot.  Never found out too much about him ‘cept that he was from California.  Well, that and the thing about the clocks.”

Leo cocked his head to the side when he heard that piece of information.  “California?  Not Bakersfield I hope?”

“Yeah, I think it was there. Somethin’ like that anyway, I don’t know much about places in California.”

Leo then asked for a description of this man, which turned out to not sound exactly like the man he had been a partner with a decade prior.  He asked some more questions and over the course of about five more minutes it became apparent to him that this Clockmaker was in fact, through some kind of ridiculous coincidence, Stanley Bittenhopper.

They continued on playing cards after that but Leo was not focusing on the game.  Once the yard time was done and he was back in cell, he laid back and considered this new piece of information.  Then he applied it to his current obsession and soon came to what he knew was going to be the final plan, the one he would use to get some satisfaction.  He would use his old friend Stanley’s newly acquired bomb making skills to get his revenge on Otto and the Marlborough.  All he needed now was for his parole to be granted and then he would put his plan into action.

Good news in that regard arrived on November 26th and on December 2nd of 1937 Leo walked out of Stillwater Prison on parole.  The revenge plan was definitely a priority but he stopped first to visit Jenny Tillman, a tall blonde woman to whom he had been writing while incarcerated. They spent three days together at a small cabin she had arranged at Leo’s insistence prior to his release.  Borrowing some money from her, he then traveled to Minneapolis where he spent a day spying around the Marlborough to verify that Otto was still employed by the hotel.

After that, funded now by a quick hold-up job he pulled in Saint Anthony, he took a room above the Cherokee Heights Grocery in West Saint Paul and started trying to reach Stanley by phone.  It took four days of calling around before his old partner finally answered.

“Who is this?”  The man answered quietly.

A silence followed, about ten seconds of nothing, then Stanley replied.

Leo started to answer but Stanley cut him off.

“Good lord man, it’s been ages, ya know?  It was such a damn long time ago, what a time we had back then!  Those were the best times.”   His voice was exuberant and filled with happiness.

Leo was taken aback by the sudden change in Leo’s tone and manner.

“Yeah, we had fun, made some money,” he replied.

Stanley ranted on for about three more minutes before falling into a sudden silence again.

It took another minute but finally a reply was heard.  “I’m here.  What do you want, anyway?”  The voice was soft again, with a timid, hesitant tone.