So that day passed and then the next two and Leo spent the time mostly just sitting around his room and reading.  At least he read when he could, as a majority of his waking moments were spent pondering the situation he was in and just how much danger there might be for him.  His thinking went in a circle, over and over again; Shannon’s mad and wants him dead, some thug is just waiting for him to step outside the Savoy to collect the money on his head by putting him down, Pendergast would not leave him in such danger, he was safe after all, Shannon’s mad…  On and on it went. 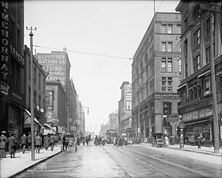 Finally, after breakfast on Tuesday, January 29th, Leo had convinced himself that all was indeed well, he was in fact protected and could carry on with his normal routine.  There was not a shred of evidence to support that, other than the fact that he was still alive, but he chose to believe it anyway.  Stepping out the front door of the Savoy into an usually warm winter morning, Leo took off at a leisurely walk.  He was feeling good and happy, mostly preoccupied with how he could approach Tom Pendergast to capitalize on his new association with the man, and he whistled a little bit as he walked.  His destination, a nondescript brown building on Walnut Street, was a poorly kept secret of the prohibition era, a place you could pick up a bottle or two of homemade liquor.  After stopping in, Leo took the longer way back to the Savoy, enjoying the weather and his sense of better things to come.

He even stopped and sat for awhile in Central Place, reliving in memory his time spent there after the car theft, embarrassed now about his shaking hands and worry.  Those were thoughts he preferred not to linger on, so he started walking again, eventually passing between Humboldt and Central Schools.

He probably never would have noticed the man if it were not for the fact that just as he was passing the schools he bumped into a woman walking the other way on the road and almost dropped his package of liquor.  Saving it required him to spin partially around and that is when he saw the man.  Tall, maybe six foot four, dressed in a black overcoat with the collar turned up, cigarette smoke drifting out from under the rim of a wide fedora.  It was almost too theatrical for Leo to believe, and he might have shrugged it off except for the flinch.  Just as he turned around he saw the man flinch, not in an exaggerated way, just a little bit, enough to tip Leo off anyway.  The man did not want to be seen back there, walking so casually along the road about one hundred feet behind Leo.  Right in that moment he realized that his calculations about his own safety, and Pendergast’s protection, had likely been very wrong indeed.

Speeding up his pace, Leo began to take the most haphazard route possible, cutting over at every block, still hoping that maybe it was not true; Eleventh to Oak, Tenth to McGee and then finally left onto Ninth.  From there it was a straight run to the Savoy seven blocks away.  Looking back, it was still true.  The man had followed him through all of those streets and was still the same distance behind him.  His fears confirmed and all hope gone, Leo ditched the liquor package on a door stoop and took off at a run for the Savoy, embarrassed but too afraid to care.  Three blocks later, another similarly dressed but much shorter man with a mustache stepped out from behind a vehicle, put one hand inside his coat and watched silently as Leo approached.  Glancing quickly back, Leo saw that the other man had maintained his same distance and the two thugs had him neatly sandwiched between them.  Leo had reached full panic mode just as a police car turned down Ninth from behind the smaller man.  It gunned its engine just a little bit, enough to get the man’s attention, and after looking back he removed his hand from inside the coat and got back into his own vehicle.  A quick look from Leo confirmed that the taller man had also stopped his pursuit, a welcome fact but he kept running anyway.  Passing the police vehicle with a small wave, Leo did not stop until he was safely behind his own door, collapsed onto hands and knees and breathing heavily.

It took him awhile to recover, and even longer to summon up the courage to leave his room, but Leo had to get a message to Pendergast.  Uncertain if the police vehicle was happy coincidence or a sign of protection, he needed to know as soon as possible.  Since he was absolutely certain that the men would be waiting outside for him if he left, the only way he could think of was to try to get a message to Pendergast through Red.  It took six hours of waiting, sitting nervously behind a large plant in the Savoy’s lobby, but eventually Red came strolling through the door and Leo bounded over, pulling him around the corner so they could not be seen from the road.

Red pulled Leo’s hand, which was grabbing a fistful of his overcoat, away and shook his head.  “I told you Lee, ya were stupid to think that wasn’t going to happen.  I warned you.”

“I know it, damn it! Still though, you know, the police came at just the right moment, it saved me I’m telling you.  You think,”

“No,” Red interrupted, “that wasn’t nothin’ like what you’re thinking right now.  Nobody was trying to save you, it was just your own stupid man’s dumb luck.”