Leo’s appearance before the parole board came on March first, which was also his forty-second birthday.  Up to this point in his life he had not been much of one to celebrate or even really mention this event, and few people he had encountered even knew the actual date of his birth.  Prison officials knew of course and the guard who escorted him that morning commented on it, causing Leo to reply sarcastically, “Well, maybe for once it’ll be a day worth something to me.”

Leo had aged during his incarceration, his hair thinner and a little more receded since he had been brought back on the parole violation.  His features had also softened a little although there was still a fierce and determined look in his eyes.  The group of men evaluating him had changed also, with no members still remaining from that which had granted his previous release.  Still, they could read the record and had several detailed questions for him about how and why this time might be any different.

Leo was prepared for that, giving a passionate performance about how much he had changed, the lessons he had learned and his determination to, “find a quiet place to just live a simple domestic life, no more foolin’ around, no more crime.”  He also mentioned that he wanted to get married and start a family and would find a job right after getting released.  Leo left the hearing not all convinced that it had worked as several of the board members openly questioned whether he was serious about any of his promises this time.   Leo spent the next five weeks in a rather black mood, sinking into a sullen silence as he contemplated the years that stretched before him in the the prison.

On the morning of April fourteenth a guard, one named Mike Maryland who had a fairly good relationship with Leo, walked up to his cell and stopped.  He stood there just shaking his head back and forth, a small smile on his face.  Eventually Leo looked up from the book he was reading.

“What is it?  What are you bothering me for?”

“Well, go wonder about it some damn other place.  You’re bothering me.”

“I’m just wonderin’ how a creature like you manages to come up with so much luck.”

Leo raised an eyebrow but did not reply.  The guard stoped shaking his head, crossed his arms and winked. 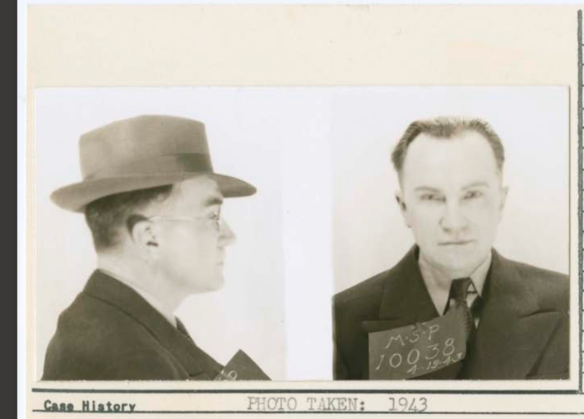 “I’m here to tell you the news Humbert.  They granted you parole.”  He then walked away as Leo, who had sprung up in disbelief, shouted a series of, “Are you serious?” and “You better not be pulling my leg,” after him.  Three days later, at one-fifteen in the afternoon, Leo walked out of the prison with a small bag of his personal belongings and his fedora along with the three dollars he had been given by the prison.

It took him exactly one day to violate the terms of his parole although he did not do so without a plan.  Leo was very serious about staying out of trouble and especially off of law enforcement’s radar but he had a pressing task to accomplish.  He needed to settle up with Stanley once and for all.  Spending some of his money on a bus ticket and a new suit, he was soon on his way to find his former partner.  When he arrived in Bakersfield he took the time to try to avoid being noticed, pulling his hat low over his face and avoiding any direct contact with people on the streets.  He arrived to Stanley’s workshop to find it empty and locked up with visible signs that it had not been in use for quite some time.  Peering through the window though he could still see some of the clocks sitting silently on the shelves and a small bucket of tools on the floor.   Not wanting to have to speak to anyone directly, Leo than made several phone calls, including one to Stanley’s father, disguising his voice when he spoke.  In every case the result was same.  No one knew where the Clockmaker was and he had not been seen around Bakersfield since sometime early in 1940.  Stanley’s father, obviously worried about his son, actually asked at the end of their conversation to, “Tell that boy to come back when you find him.  He can still come home.”    Leo spent a few more days poking around for information but ultimately decided that he needed to get back to Minnesota before it was noticed that he was outside the state.   Two days later he took a room at the Fifth Street boarding house and settled in to try to figure things out on April 30, 1943. 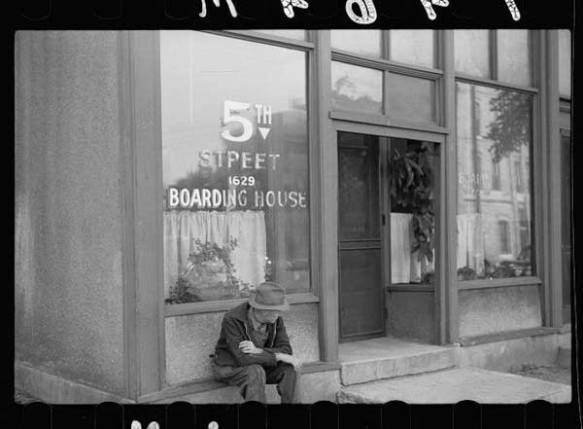 He had, of course, no intention of actually settling into some kind of boring, work-a-day life that he was sure the prison officials thought he ought to pursue.  Leo did, however, need cash in order to survive until he had a plan so he took a position as a delivery driver for a hardware company.  That job filled the dual purpose of providing him with a wage while also giving him the opportunity to drive around the Twin Cities and its surrounding towns as he made his deliveries.  As he did so Leo was casing banks and it took him only two weeks to pick out his target.  He proceeded carefully, true to his personal pledge to not get caught, and spent an additional month planning everything out, using his days off to observe and note every detail about the bank and its operation.   When he did finally act it was a simple and smooth robbery, with Leo in and out in under four minutes and a total take of six hundred and fifty-one dollars.  He quit the delivery job the next day and purchased himself several sets of nice clothing and a brand new fedora.  He did, however, remain in the boarding house, figuring that moving into a high-end place was definitely going to get him some unwanted attention.  Flush with cash again though, he went back to his practice of visiting strip clubs, wining and dining women and eating steak whenever possible.  He was feeling much better about things and was sure that his plan for the future was going to work out well.

It was while out one night at a downtown bar that Leo first met Amanda.  She was a striking woman, with dark brown hair that featured natural auburn highlights along with bright green eyes and ivory skin.  She was also taller than many women, so easily noticed in a crowd and wore clothing that complemented her slight figure.  Leo was attracted to her immediately, offering to buy her dinner, an offer that she refused.  He did convince her to meet him for a drink a few days later and, after a few weeks of trying to resist his entreaties, she agreed to a dinner date in late May.  That went well enough that she continued to meet him almost nightly for another two weeks and by early June she was starting to believe that she had herself a boyfriend.  Leo also realized that the relationship was evolving although he continued to escort several other women around town later in the evening after Amanda and he had said good-night to each other.  She knew nothing about it and was certain enough of her feelings to start mentioning him to her parents and friends.

During all of this time that they were getting to know each other Leo had told her that he was a traveling salesman who was often out of town because he had so many clients to visit.  The way he dressed, acted and spent money convinced her that he was very successful and he told stories about his sales career that made it seem believable to her.  Leo also used some of the details of the fake history he had developed in prison as he expanded on his life-story for her as they spent more and more time together.