Leo started by trying to find a willing accomplice which proved to be a little bit harder than he initially thought it would be.  It turned out that the group of hard-core criminals in the area had deep suspicions of outsiders and were wary to engage in work with them unless they came with a good recommendation from another criminal in the area.  Clark Mason proved to be of no use in that regard and actually told Leo to not even try to get back in with his operation if he decided to go through with the robbery.  “We’ll have nothin’ to do with you after that, nothing at all,” was the exact way he had put it to Leo.

He was determined to do it though and eventually, after another two days of working at it, Leo did find someone who seemed willing to join up in the scheme.  Tom Brinnegan was a short, stocky Irishman who had a face full of freckles and walked with a limp that he said came from a childhood incident with a horse.  They had crossed paths while Leo was visiting a speakeasy and, although Brinnegan had been just as wary of Leo as everyone else, he soon was convinced to overlook that initial caution.  Leo told him quite a story, full of enough truth that it could be verified if looked into, along with a new version of his gunshot wound in which Leo was hit in the course of a getaway during a bank robbery.  Tom shared his own story, much more simple than Leo’s, in which he stated he had done a few, “stick up jobs on people at night and robbed a small gift shop about a month ago.”  That did not exactly inspire much confidence in Leo, but he really wanted to get his plan into action and Brinnegan was the only willing participant he could find.  So the two of them entered into what Leo hoped would be a very temporary alliance to pull off the robbery and get him enough money to leave the area. 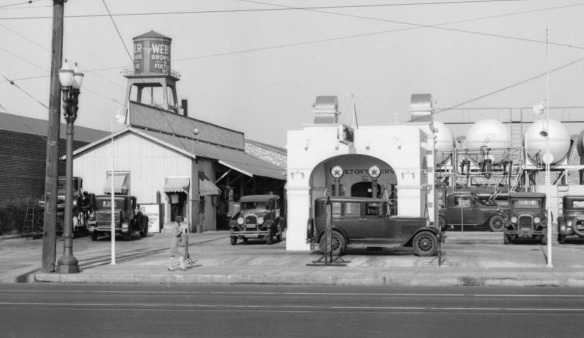 The next time they met, when Leo had planned to take Tom and go look at some potential targets, the Irishman arrived with a place already picked out.  He told Leo that it was a place he knew from a time when he lived a little closer to the central part of Los Angeles, and that is did a good amount of business due to its location.  The station, Hamilton’s Texaco, was right outside of the main business section of the city and was surrounded by commercial enterprises that kept traffic flowing in and out of the area.  It was, however, quite a distance from where Leo was currently staying and he was reluctant to target a place so far away, especially as it would make the planning very difficult.  Brinnegan had an answer for that also, indicating that his brother owned a motel in the area and would let them stay there for cheap and not ask any questions.  Still uncertain, Leo agreed to go look at the place if Tom could figure out a way to get the two of them over to the area.

The next day, June 8th, the Irishman pulled up to the Waverley, picked Leo up and they drove to the station, pulling in to get some gas when they arrived.  As the attendant filled up their tank Leo wandered around the station’s lot and out onto the road, having to admit that he was impressed.  It was indeed a very commercial area with much traffic and he observed two cars turn into the Texaco just in the few minutes he stood there watching the road.  There were several employees on duty also, further backing up that the station stayed busy, and none of those people seemed especially concerned with security or the possibility of crime.  Once they were fueled up Tom drove around the area for another twenty minutes and then Leo agreed that the Texaco could make a good target.  Tom took him back to Van Nuys where he packed up, checked out and by three p.m. they had settled into the motel run by Brinnegan’s brother which was just 5 blocks from the gas and oil station.

Over the next six days the two of them were very busy as Leo took over the planning of the operation.  Brinnegan had told him that his brother knew the sister of a man who worked at the station and Leo set him to tracking that man down to see if he could get any information that might be useful.  Leo took on the job of doing all of the scouting, spending twelve hours at a time out on the streets near the Texaco, carefully watching everything that happened.  He carried a small notebook with him and wrote down everything; the times when he saw police cars, the busiest and slowest periods at the station, when deliveries usually arrived and he also tried to figure out when the owner went to the bank.  That last item was difficult to determine exactly from a distance, especially as the man came and went from the business often during the day.  Leo hoped that Tom might be able to come up with that information but he was disappointed in that regard.  In fact, Tom returned every night with nothing to share other than that he had not been able to figure out a way to meet the man from the station in a way that would not seem suspicious.  Leo pressed him to try harder and specifically mentioned that they needed the bank information.  By the late afternoon of June 14th Leo had a good plan in place that was just missing that one vital piece of information.

“You need to talk to that guy, one way or another, I don’t care anymore if it looks suspicious.  I need to know about when they take the money to the bank!” Leo exclaimed to Tom after another report of failure from his partner.  “We’re going to look like idiots if we rob the place ten minutes after most of the cash is taken to the bank!”

“I just can’t figure out what to do.  I mean, I tried, but he won’t talk much.  I did what you asked and tried harder, I caught him at Lefty’s, he was pretty spliff’ed too but he still wouldn’t talk,”  Tom replied defensively.

“No, no, no!” Leo snapped back.  “We need to get this done.  We’ll just have to make due with my notes.  I think I have a pretty good idea when would be best, but that information would have helped make me certain.   Still, look at this and see what you think.”

Leo put down a hand-drawn map of the area along with notes on the police patrol pattern, the slowest traffic times, a side drawing of how they would get in and out,  and two periods during each day when he thought the owner might be going to the bank.  They talked back and forth, with Tom mostly worried about the police and getting caught.  Leo allayed those fears by telling him that the patrol pattern seemed pretty regular and they would stick to that since, “police can’t help themselves you know, they just drive around in the same circles everyday.”   That seemed to convince Brinnegan and they agreed to do the robbery at three p.m. the following day.